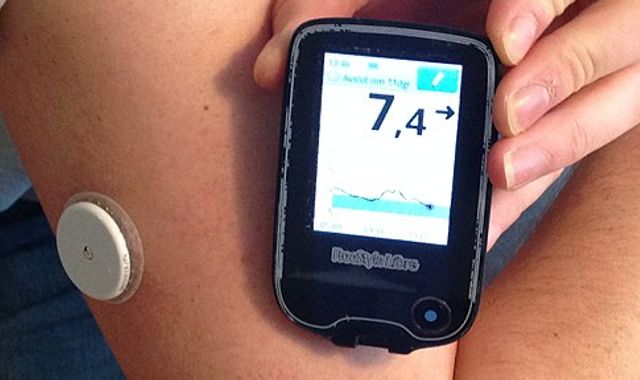 Hundreds of adults and children with type 1 diabetes are testing an “artificial pancreas” to monitor their insulin levels.

The device – a closed-loop hybrid system – reads blood sugar levels and uses an algorithm to determine how much insulin should be delivered.

It is being tested in more than 30 NHS diabetes centers across England, with 875 people benefiting from it for a year so far.

The study is the first of its kind in the world and the device could soon be available for use through the NHS.

Professor Partha Kar, NHS National Specialist Advisor for Diabetes, said: “It’s not far from the holy grail of a fully automated system, where people with type 1 diabetes can get on with their lives without worrying. worry about glucose levels or medications.”

This could be particularly useful for children – it is estimated that only a third of young people with type 1 diabetes achieve good blood sugar control, which is necessary to prevent complications from the disease.

Six-year-old Charlotte Abbott-Pierce was diagnosed with type 1 diabetes just over a year ago and is part of the pilot.

Her mother, Ange, said: “Before the hybrid closed-loop system was installed, my husband and I were up every two hours every night checking Charlotte’s blood sugar and giving insulin most of the time, sometimes doing finger pricks or treating ketones due to rapid increases in blood sugar.”

Chris Askew, Managing Director of Diabetes UK, said: “This technology has the potential to transform the lives of people with type 1 diabetes, improving both their quality of life and their clinical outcomes.

Meanwhile, new research has shown that even thin people can achieve remission from type 2 diabetes by managing their calorie intake.

Obesity increases the risk of type 2 diabetes, but 10% of people with the condition have a BMI that does not reach the “obesity” threshold.

A trial led by expert Professor Roy Taylor, from Newcastle University, found that 70% of participants with a low BMI went into type 2 remission through diet-controlled weight loss.

About 20 patients were put on a strict diet of 800 calories a day for two to four weeks, followed by four to six weeks of weight loss maintenance when normal food was gradually reintroduced.

This cycle was repeated up to three times, until the participants lost between 10% and 15% of their body weight, and after 12 months the participants’ BMI averaged 22.4 – compared to 24. ,8.

Around 70% had gone into remission – half of them after just one cycle of weight loss.

Executive Mosaic presented Lieutenant General Michael Groendirector of the Joint Artificial Intelligence Center, in the Wash100 2022 class for his vision of enabling AI. This year marks his second consecutive selection to Executive Mosaic’s annual list of the most influential people in the public procurement industry. Groen has led the JAIC since October 2020 and […]

Artificial intelligence: “Terrifying, alien, relatable in a strange, captivating and strange sense.This is how a 16-year-old describes the complex world in which he works. Rio Harper is a grade 11 student. Rio has built an AI program that creates digital art. Rio won over $ 100,000. Rio plans to go to college. Rio is worried […]