It was only a matter of time before the rise of artificial intelligence led to the creation of artificial data to power AI models. Although the idea of ​​synthetic data is not new, its use and potential has grown rapidly over the past year. A number of tech startups and universities are now offering synthetic data services for a variety of uses, including insurance and finance.

While synthetic data can be collected through sensors and through images, video or audio, just as real data is collected, Ali Jahanian, a former researcher at the Computer Science and Artificial Intelligence Laboratory ( CSAIL) from MIT, states that “the idea is to have an algorithm – like a simulator or a generative model – to generate such data modalities with the aim of having these synthetic data as realistic as the real ones.

Another consideration is that training AI models on real data has resulted in issues of data privacy, bias, and fairness – issues that are essentially eliminated with the use of synthetic data. And often the type of real data required for a project is simply not available or of poor quality. 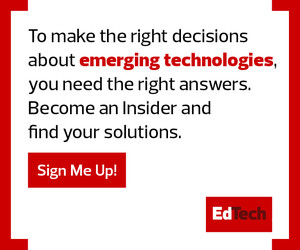 Jahanian says to think of “a generative model that generates synthetic data as an interface to your real data. That means you can get your real data but transform it in ways you couldn’t with your real data.” At CSAIL, Jahanian and his team were able to transform daytime scenes into nighttime scenes and turn a dormant volcano into an active volcano.

“These are examples of transformations that you can get for free from a generative model that aren’t available in the actual data you’ve collected,” he says.

LEARN MORE: Learn about some of the emerging AI technologies in higher education.

The use of synthetic data will continue to grow

With respect to the higher education space, an application of synthetic data could be to “provide different narratives about a concept by being able to generate rich content. Imagine if everyone could generate the content they need by customizing it. This can help each individual learn in their own learning style. Maybe a person needs more knowledge to understand a concept,” says Jahanian.

Source: blogs.gartner.com, “By 2024, 60% of data used for AI and analytics project development will be synthetically generated,” July 24, 2021

“I believe it will create parallel worlds and it will have its uses,” he says. “Depending on how wealthy we want this world to be, it could take a few years. However, we are currently seeing examples of synthetic languages ​​or image builds – like OpenAI GPT-3 and DALL-E – that are very close to human capabilities or even beyond in some specific cases.

How can artificial intelligence help increase audience engagement with news?

Credit: Ketut Subiyanto from Pexels Successful solutions are never about trying to create a new product, but about correctly defining the problem we are trying to solve. That was the approach of more than 20 news outlets around the world who worked together last year to solve some of their problems, using artificial intelligence (AI) […]

A cyber weapon to fight against cyber fraud: artificial intelligence

Organized crime is very active in the private and public sectors. From banks to large retailers, from federal governments to small businesses, fraudsters don’t exercise judgment when deciding which type of organization to target. Additionally, criminal networks are actively recruiting and deploying groups of thieves across the United States, making it increasingly difficult for companies […]