Nutrition can be confusing. Foods that may be eaten by some are not recommended for others, depending on medical conditions and the body’s ability to digest them. Consider artificial sweeteners. The US Food and Drug Administration, or FDA, says sugar substitutes are safe to consume in the amounts people usually eat or drink. But how much is acceptable and safe for human consumption?

Regulators set acceptable daily intake levels, or ADIs, for each sugar substitute. The ADI is the maximum amount of a food additive that can be safely consumed daily throughout a person’s lifetime without any adverse effects. The amount will vary depending on a person’s weight and the artificial sweetener. To get an idea of ​​how much sugar substitute can be consumed without adverse effects, consider the following. A 132 pound person would need to consume these amounts to reach the ADI:

Another sugar substitute that is gaining popularity is stevia, a calorie-free plant-based alternative to sugar. It is extracted from the leaves of the Stevia Rebaudiana plant. Stevia is 200 to 300 times sweeter than sugar and can be found in concentrated powder or liquid form. Stevia contains only one gram of carbs per teaspoon, and because it’s calorie-free and low in carbs, it doesn’t cause your blood sugar to spike. Stevia is marketed under the trade names of Truvia, PureVia and SweetLeaf. More research is ongoing to determine the effects of stevia, but it is generally considered safe (GRAS). An overdose of stevia is not harmful to health but can cause a particularly bitter taste. 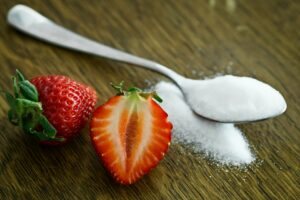 Sugar substitutes are widely consumed and are present in a variety of products ranging from cereals and dairy products, such as in some breads and yogurts, to soft drinks and condiments. Surveys in the United States indicated that up to 25% of children (aged two and older) and more than 40% of adults surveyed consume sugar substitutes, according to a study published in 2017. The majority included them daily. base – showing how common sugar substitutes are in the American diet.

Sugar substitutes are a way to reduce calories from added sugars, and FDA guidelines and current research support their safety when consumed at levels within the Acceptable Daily Intake. The key is to select foods that do not contain added sugars and to reduce the amount of sugar (real or substitute) that you use on a daily basis. Many foods contain natural sugar, so it’s the added sugars that we want to limit.

This popular 4-session series is scheduled for September 26, 29, October 3 and 6, at the Texas A&M AgriLife Extension Office, 1200 W. Houston Street. We will discuss carbohydrate foods; Make recipes with fat better for you; Double Pleasure Side Dishes: Reduce sodium and increase fiber; and Celebrating Sensibly with Diabetes. A $20 fee, payable at the first session, will help defray the cost of materials and demonstration ingredients. Please call 903-885-3443 to register.

Life is about trying new things, having fun, making mistakes and learning from them – unknown

Global Artificial Intelligence (AI) in Cyber ​​Security Market research is an intelligence report with meticulous efforts undertaken to study the correct and valuable information. The data that has been reviewed takes into account both existing top players and upcoming competitors. The business strategies of key players and new industries entering the market are studied in […]